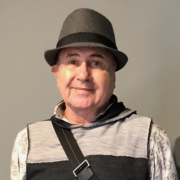 César E. Trasobares is an artist, art activist, author, public art consultant and curator. He received fellowships and grants from the National Endowment for the Arts (1979), the Cintas Foundation (1980) and Art Matters (1995). His recent solo exhibitions include CUBAN STREAMS: 1855-1965 for the Legacy Gallery at Miami Dade College’s historical Freedom Tower and Redacted at LnS Gallery in Coconut Grove, Miami.

As an extension of his studio art practice, he served as Artistic Advisor for the Village of Key Biscayne Public Art program from 2003 to 2020. He led various initiatives as the Creative Coordinator for the Vasari Project, an archive about the history of the visual arts in Miami at the Main Library of the Miami-Dade Public Library System in 2011.

In 1998-99 he worked as Consulting Artist for the Artful Truth program at the Wolfsonian-FIU Museum developing educational materials about design and visual literacy for art teachers and students.

He served as Executive Director of Metro-Dade’s Art in Public Places Program (1985-1990) overseeing the completion of important site-specific artworks for various government buildings, community centers and parks by Edward Ruscha, Oldenburg and van Bruggen, Nam June Paik, Elyn Zimmerman, Richard Haas, Betye Saar, Beverly Buchanan and Rockne Krebs, among others. He oversaw the development of proposals for Miami International Airport, Key Biscayne Gardens and the Miami Seaport Bridge. Under his leadership, the APP Program sponsored temporary installations: Crandon Art Garden, Key Biscayne (1987) and New Music America in Miami (1988). The program was featured in the 1988 Milano Trienale as a showcase of government arts patronage, in a display designed by Frank Ghery, with a selection of proposals and artworks organized by Germano Celant.

As the New York Coordinator of the Estate Project for Artists with AIDS, 1996 to July 1998, he managed the grants program and participated in workshops, publications and lectures representing the estate planning initiative and its programs in various artistic disciplines.

He is writing Among Friends, a memoir of his friendship with artists Ana Mendieta, Felix González-Torres and Carlos Alfonzo.

Before becoming involved in art administration, Trasobares served as the Chairman of the Continuing Education Department (1975-78) at the North Campus of Miami-Dade Community College.

Born in Holguín, Cuba, he immigrated to the United States with his parents and brothers in 1965. The family lived briefly in Mexico, D.F. before moving to Miami.