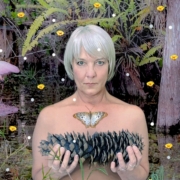 The work of multidisciplinary Miami based artist, Alette Simmons-Jimenez, is rooted in a tradition that values vision as well as craft. Her work celebrates the physicality of the handmade while incorporating tangible spiritual components from our natural surroundings.  On receiving a BFA from Newcomb College/Tulane (New Orleans) she relocated to the Dominican Republic and began a studio practice.

The artist has received a Knight Arts Challenge Grant, a Florida Fellowship Grant, a Florida Artists Enhancement Grant, a Miami-Dade Tourism Development Grant, and a Miami-Dade Community Grant.  In the Dominican Republic, Simmons-Jimenez was the first woman to exhibit work in video installation and was subsequently awarded a “1st Prize in Video” at the country’s XVIII Biennial. Her continued work in video can be seen in venues around the world.