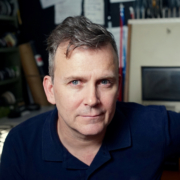 Barron Sherer is a time-based media artist with a background in moving image archival practice and research. He worked as a film archivist and that practice eventually evolved into his art practice. He currently works in Miami with a focus on altering and repurposing archived films. In the early 2000s, he was curator at Lynn and Louis Wolfson II Florida Moving Image Archives where he programmed moving image festivals, public access activities, researched collections and managed photochemical conservation.  In 2015, Sherer co-founded a Knight Foundation supported studio space that was a three year project dedicated to use of legacy media and technology.

Sherer’s work has been described as analyzations of cinema’s and photography’s conventions and roles as product, while questioning cultural memory and modernity. His work primarily focuses on re-purposing previously produced content by manipulating motion pictures, slides, video and photographs through formal experimentation. Physical editing and manipulation of orphaned content is used to produce time-based media installations, quite often presented with music as a metronomic aid that complement his synchronized film and video projections. Sherer embraces mishaps and the randomness that comes along with his editing techniques, adding a sense of serendipity to his work. Sherer’s exploration and artistic process in social media platforms, such as Instagram, creates both source material and documentations of his temporary and experiential installations.