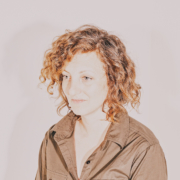 Cara Despain is an artist working in film and video, sculpture, photography and installation addressing issues of land use, the desert, climate change, visualizing the Anthropocene, land ownership and the problematics of the American west. She was born in Salt Lake City, Utah (1983) and currently lives in Miami, Florida and works between the two, which affords her unique opportunities to draw connections between two seemingly disparate locales. She holds a BFA from the University of Utah (2006). In 2012, she was selected for the Salt Lake City Mayor’s Award in the visual arts, and in 2016 she was selected for the South Florida Consortium Fellowship.

Her work is included in Rubell Family Collection, as well as the State of Utah and Salt Lake County art collections. Recent exhibitions include it doesn’t look like paradise anymore at Southern Oregon University; FREE!. at Brickell City Center, Miami; Cryin’ Out Loud at the Center for Contemporary Arts Santa Fe, Fringe Projects, Miami, Slow Burn at Spinello Projects, Miami; and No Man’s Land at Rubell Family Collection, Miami. In 2014 she was the Art Director for the feature length film The Strongest Man that premiered at the Sundance Film Festival (2015), as well as A Name Without a Place which premiered at the Miami International Film Festival (2019). A short documentary about her and her work aired on Art Loft, WPBT and PBS and screened at the Miami International Film Festival in 2016.

She was selected for a 2018 Ellie’s Award through Oolite Arts (formerly ArtCenter/South Florida) to produce her own first feature film and video installation hybrid Earthbound Objects. Writing and research play a major role in all of her creative work, and she often works very site-specifically— researching, casting objects, or writing in the field. Recent residencies include Feminist Summer Camp at Birch Creek Ranch in central Utah (which she co-facilitates), and Signal Fire Wide Open Studios field research program in the four corners area.