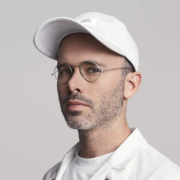 New York based artist Daniel Arsham straddles the line between art, architecture and performance. Raised in Miami, Arsham attended the Cooper Union in New York City where he received the Gelman Trust Fellowship Award in 2003. Architecture is a prevalent subject throughout his work; environments with eroded walls and stairs going nowhere, landscapes where nature overrides structures, and a general sense of playfulness within existing architecture. Arsham makes architecture do things it is not supposed to do, mining everyday experience for opportunities to confuse and confound our expectations of space and form. Simple yet paradoxical gestures dominate his sculptural work: a façade that appears to billow in the wind, a figure wrapped up in the surface of a wall, a contemporary object cast in volcanic ash as if it was found on some future archeological site.

Arsham’s work has been shown at PS1 in New York, The Museum of Contemporary Art in Miami, The Athens Bienniale in Athens, Greece, The New Museum In New York, Mills College Art Museum in Oakland, California and Carré d’Art de Nîmes, France among others. A first monograph of Arsham’s work was published by the French Centre National des arts plastiques and a second one was published by Galerie Perrotin in 2012.