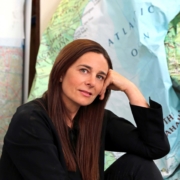 Luciana Abait is a photo-artist born in Buenos Aires, Argentina. From 1997 to 2005 she lived and worked in Miami, where she was a resident artist of ArtCenter South Florida. She relocated in 2005 to Los Angeles where she now lives and works.

Abait’s work has been shown in galleries, museums, and international art fairs throughout the United States, Europe, Latin America and Asia. Some of these are: Aquarium at Los Angeles International Airport, Flow, Blue at Rockford College Art Museum in Illinois, Luciana Abait at Jean Albano Gallery in Chicago, Nest at Lehigh University in Pennsylvania, Sur Biennial in California and ARCO in Spain. She has also completed numerous corporate and public art commissions among them “Vistas”, a 24 feet mural commissioned by Miami- Dade Art in Public Places for Crandon Park Golf Course in Key Biscayne, Florida.

Abait is the recipient of the 2016 Santa Monica Individual Artist Fellowship Award. Abait’s works are held by private, public and corporate collectors from the United States, Europe, Latin America and East Asia. Among these collections are: The Related Group, Florida State University, Permanent Art Collection of Neiman Marcus, Miami- Dade Public Library System, Four Seasons, White and Case LLP, University of Miami in Florida, King and Spalding in Houston, Lehigh University Museum and West Collection in Pennsylvania, Sprint Corporation in Missouri, Flint Institute of Arts in Michigan, the Board of Governors of the Federal Reserve System in Washington D.C. and Freshfields and Swire Properties in Hong Kong.