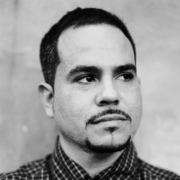 Michael Vasquez’s work explores a world of misguided youth coming of age, trying to find themselves. In search of acceptance and belonging within an inherent disposition of broken homes and underserved communities, Vasquez’s subjects are primed for the influence and allure of neighborhood street gangs and cliques, as they navigate the expectations and pressures of their peers, society, and culture at large.

Through the timeless visual presentation of identity, – the painted portrait, Vasquez presents his subjects in dramatic, powerful compositions. The sitters’ gestures and expressions legitimatize a complex emotional landscape full of dueling feelings such as pride and shame, and toughness and vulnerability. Vasquez depicts these sentiments through a language of mark making that transcends representational likeness to describe the emotion, attitude, and energy of the sitter(s), setting, and the relationship between the two. He utilizes visual cues that inform identity such as color, specificity of clothing, hand signs, symbols, and tattoos; while maps, neighborhood landmarks, signage, and native foliage describe environment and establish location. Beyond portraiture, his work delves into the psyche of social landscapes, narrating neighborhood events, mischief, and the trials and tribulations that come with the territory. A place where stereotypical, often negative traits of masculinity are perpetuated and affirmed; where a sense of, or an illusion of, identity, community, and wholeness exists.

Michael Vasquez was born in St. Petersburg, Florida. He graduated from New World School of the Arts with a BFA in 2005 and currently lives and works in Miami. Vasquez’s work has been exhibited in numerous internationally recognized galleries and institutions including The Kemper Museum, Kansas City; Saatchi Gallery, London; Lehmann Maupin, New York City; the Americas Society, New York City; The Smithsonian National Portrait Gallery, Washington D.C.; and in Florida at Fredric Snitzer Gallery, the MDC Museum of Art + Design; Frost Art Museum; MOCA North Miami; and The Orlando Museum of Art.