As Flesh to Land: Mateo Nava at Spinello Projects

How is a body like a map? Observable scars, an errant rough patch, a sore extremity: there are visual markers, points of interest, though they’re temporal rather than spatial signifiers—a moment embedded in the skin. Deeper than that is the blood, or a lifeline to our ancestors, carrying the stories and memories of continents we might never visit.

In Mateo Nava’s intricate, lush paintings—on view in his solo exhibition As Flesh to Land at Spinello Projects—bodies alchemize into topographies, becoming what Nava has named “body-places”: hybrid human-terrains, lovingly drawn and uncontained. Nava typically avoids canvas stretchers and instead uses large swaths of fabric and paper as his foundation; they’re nearly sculptural and often massive. Acrylic-and-canvas roots and limbs—multitudes of them—burst from the edges of blooming humanoid forms, stretching amorphously toward the ceiling or spread across the length of a wall. On the day I visited, there was a sunshower, considered a good omen in my mother’s Caribbean hometown, and the space was quiet, empty. Still, I believe it was Nava’s mythic beings—many of them glowing with an overlay of luminous paint—that commanded silence, even reverie. 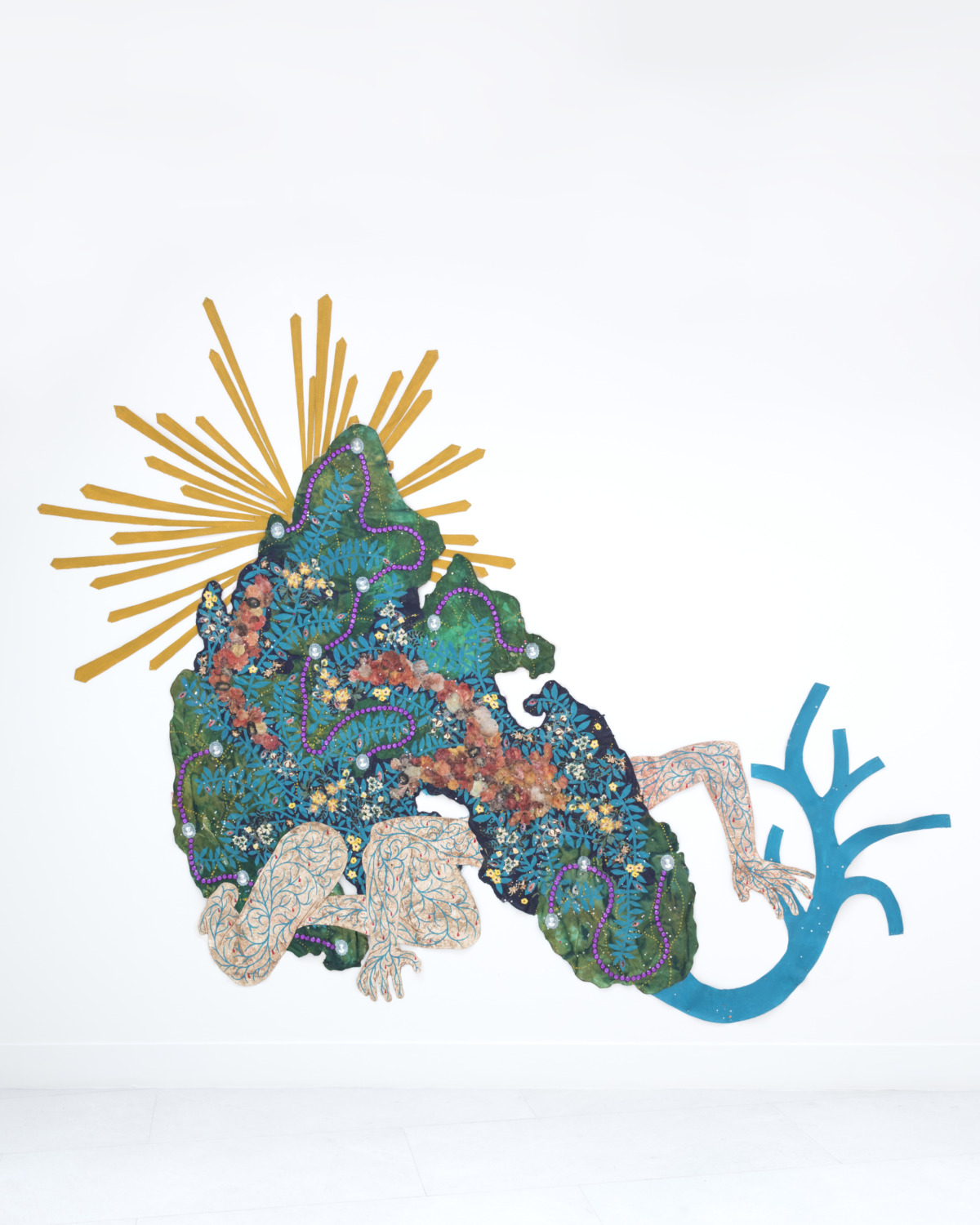 Nava was born in San Luis Potosí, Mexico, raised in Mexico City, and is currently based in Miami. His body-places are diasporic: blood vessels along an arm or a palm are like pathways, teardrops, below an eye, like pools and ponds. They indicate movement; they are travelers themselves. Cut-out faces from found photos, beads, and floral-printed collages are layered onto painted or dyed fabric, hunks of it foliage-green or brown or a rivery shade of blue. The land a body navigates can seep into the skin, finding a home; Nava’s body-places are fleshly, but they’re also terrene. In Milpa (2021), a praying, blue-veined figure—or a map decorated with waters—is crowned with a row of maize and beans, a love note to Mesoamerican flora and fauna. In Plegaria de brazos plegados (2021), the negative space of purplish canvas, cut to look like chain-link, is interlaced with a map of palms, blood vessel-tributaries, and prints of vines. Fences and other trappings of state borders and violence are rendered in orange and teal, their menace debunked with the richness of plants, the blood droplets along veins that also look like flowering trees. If Nava’s figures have beating hearts, they are surely located beneath the soil or inside a root, pulsing the dense greenery to life.

His body-places might breathe, too. Mangrove seeds appear in Dispersal I and Dispersal II (both 2020)—they’ve been cast in polyurethane and the remaining molds hang from strings, alongside encasing of the artist’s hands, made of the same material. Here in Florida, mangroves are particularly resonant; like humans, they inhale—their roots, which project above the floor of the bay, contain pneumatophores, also called “breathing roots.” You’ll leave As Flesh to Land thinking, of course, of the land, the way the land is a body. But Nava has also evoked the heavens. Small gold crosses occasionally make their way into the fabric; the gold, ray-like strings of canvas in Caída de luz (2019) recall both the sun and the radiant crown of the Madonna. Some palms are dotted with blood at their center. Colonization brought such symbolism to the Americas; in Nava’s hand, it’s part of the earth, which is already holy. In Tocando Heridas (2021), an eye, set of lips, and beanstalk hair form a visage that seems to whisper into a cluster of leaves. In turn, the leaves reach toward a mountain range (or a curve of flesh), carrying the message. 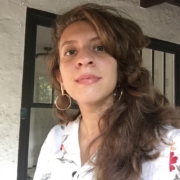