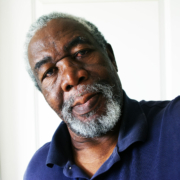 Robert McKnight was born in Kingstree, SC on June 11,1951 and moved to Miami with his family in 1953. From early childhood he has excelled in art. While attending Miami Killian High School, he studied painting at The Miami Art Center located on Kendall Drive. McKnight went on to study fine arts at Syracuse University, receiving a BFA in Painting in 1974, and as part of his work at Syracuse studied sculpture in London at the Sir John Cass School of Art from 1971-72.

Upon his return to Miami, he worked at Miami’s Metrozoo as an exhibit designer specializing in the design and construction of the artificial rock facades. Later he worked with Rock & Waterscape Systems of California at Disney World in Orlando and throughout the southeastern United States and the Caribbean. He has always been active in the fine arts, exhibiting extensively throughout South Florida and the southeastern states.

He has had numerous solo shows and has participated in group exhibitions at the Lowe Art Museum (University of Miami) , the Miami-Dade College North Campus Art Gallery, the Art Gallery at Florida Atlantic University in Boca Raton, Gallery Antigua, Amdalozi Gallery, Green Light Art Space, The Bakehouse Art Complex, Farside Gallery, among others.

As a member of The Miami Black Artist Workshop in the1970’s and KUUMBA Artist Collective, McKnight has worked to generate opportunities for greater professional visibility of African-American and African artist. Says McKnight, “My mission as an artist is to create works that are individual in style and content reflecting my heart and soul, stretching the poetic and artistic license in both material and content.” He has paid inspired and consistent tribute to his cultural heritage in his efforts on behalf of other artists, and he has added to that heritage through the power and originality of his art