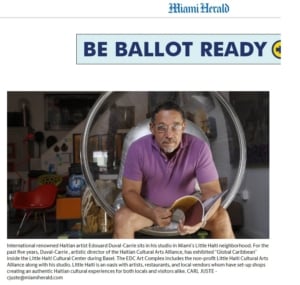 Miami visual artist Edouard Duval-Carrie has won the Michael Richards Award, which includes $75,000 and a commission for a work to be exhibited at The Bass, in the inaugural presentation of The Ellie awards.

More than 500 artists and art teachers submitted applications for The Ellies, created by Oolite Arts to recognize and elevate the careers of Miami visual artists. The awards are named in honor of ArtCenter founder Ellie Schneiderman, who transformed several rundown Lincoln Road buildings in 1984 into artist studios. Awards were judged by a jury of independent art experts familiar with the Miami arts scene.

The 44 winners in this year’s program will share a total of $491,000, funded from the sale of one of ArtCenter’s buildings. The highest award is named for Michael Richards, an ArtCenter alumnus who died in the 2001 World Trade Center attack. It goes to an artist who has sustained excellence over a long period of time.

“I am more than ecstatic,” said Duval-Carrie, who came to Miami more than 20 years ago and works from a studio at the Little Haiti Cultural Center. “I love this city. It’s grown since I came here; we’ve grown together I hope. I feel very humbled and very touched. I work and I work, and when this happens it makes me feel like it’s not all in vain.”

The awards’ monetary value “has moved ArtCenter into national status. It’s a very substantial amount and very indicative of where the city is,” he said

ArtCenter President and CEO Dennis Scholl said he was surprised by the response to the ArtCenter’s call for submissions last spring.

He was also struck by the strength of the ideas, he said. “Quantity is one thing. The quality was also so strong that the [ArtCenter] board has already agreed to renew the awards for a second year.”
Creator Awards of $2,500 to $25,000 were given to 38 artists to realize specific projects that include a commemoration of victims of police shootings, the transformation of concrete from a demolished housing project into monumental sculptures around Liberty City, and a documentary film on a group of gay men who arrived in the 1980 Mariel Boat Lift.

Teacher Travel Grants of $5,000 each were awarded to five local teachers. Each will travel in the U.S. to create teaching curricula.

The winners were announced Wednesday night. They are:

Jenna Balfe, $10,000, for a performance work “Transnaturism,” based on the Transhumanism movement that explores the cyclic disconnection between people, the environment and spirituality.

Marcus Blake, $6,000, for the “MiamiLith” public art installation in Liberty City created from concrete slabs from the demolition of the old Liberty Square housing complex.

Thom Wheeler Castillo, $8,000, for “Mangroove,” an exploration of the sounds of Miami estuaries.

Franky Cruz, $6,000, for “Vivarium Meconium Laboratory” encompassing a lab and a series of large-scale paintings made with a substance secreted after a butterfly emerges from its cocoon.

Woosler Delisfort, $15,000, for “This is Little Haiti” film about this fast-changing neighborhood and its cultural legacy.

Cara Despain, $8,000, “Earthbound Objects” video installation and narrative film on the man holding the Guinness Book record for the most lightning strikes.

April Dobbins, $10,000, for “ALABAMALAND,” a feature-length documentary about African-American land ownership in the rural South.

Raymond Elman, $5,000, for large-scale portraits of frequent 1950s and 1960s guests to the Historic Hampton House in Brownsville.

Guadalupe Figueras, $8,000, for ( V ) |\| T . <3 (www.cvnt.love // www.cvnt.tv) an online streaming platform and digital magazine. Julie Fliegenspan, $10,000, for a documentary based on audio clippings from her conversations with Lily Gaier, a 90-year-old Holocaust survivor.

Adler Guerrier, $15,000, for a film about spaces identified with immigrant groups.

Nicolas Lobo, $15,000, to create a modeling salon and wellness center offering experiences based on the human senses.

Pepe Mar, $10,000, for his first major museum solo exhibition at the Mattress Factory in Pittsburgh.

Jillian Mayer, $15,000, for a mobile artist residency that doubles as a survivalist shelter.

Michelle Lisa Polissaint, $10,000, for “Moonshine Moanin’ ” performance exploring the artist’s queer identity as it relates to her Southern upbringing.

Alina Rodriguez, $10,000, for “Retra-Tablos” outreach program to immigrant children and their traditions of textile art.

Silvia Ros, $10,000, for “Cuban Architects at Home and in Exile: The Modernist Generation,” photographic exhibition.

Lydia Rubio, $6,000, for “Tarnished Nature, Erasable Art” series of large-scale, interactive and erasable works focused on the impermanence of our ecosystems.

Troy Simmons, $5,000, for transformation of demolished buildings to artwork to put focus on gentrification.

Juana Valdes, $18,000, for “Rest Ashore,” an installation on migration and the global refugee crisis.

Tom Virgin, $12,000, for a collaboration between artists and writers on pressing community issues.

Juana Meneses, New World School of the Arts, for a trip to Berlin to develop her skills in publishing art books.

Justin Long, New World School of the Arts, to Maine to attend the Wooden Boat Building School for his sculpture class.

Mirena Suarez, Ada Merritt K-8, to Italy for an FIU art study program in the Renaissance.