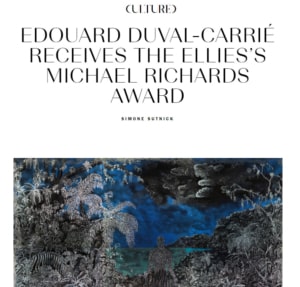 Haitian-born artist Edouard Duval-Carrié has lived and worked in Miami for nearly 30 years, long established as a local favorite. Working in a diverse range of mediums from painting and etching to sculpture, Duval-Carrié’s practice is marked by a distinct Caribbean sensibility in a nod to his heritage. Rich in symbolism and iconography rooted in Haitian history, folklore and Vodou, his work is often politically charged and spiritually oriented. At The Ellies, a series of awards given by Oolite Arts to local visual artists, Duval-Carrié was revealed on October 24 as the recipient of the Michael Richards Award: a grant of $75,000 and a commission at The Bass in Miami Beach. The award is given to a Miami-based artist who has cultivated an original practice over a long period of time and is selected by a jury of local and national curators. Here, Duval-Carrié opens up about his history with Oolite Arts and what this award means for his future.

What was your initial reaction to the news about the award? Dumbfounded. I was in my studio, I had to sit down. I am very touched to tell you frankly. I have to say, I moved to Miami in 1992 and had no contacts here. It was on a whim that I came here. I am from Haiti, and had been living in France at the invitation of the government. I passed by Miami once, went to the beach and thought, “this is my kind of place.” This award validates that I made the right decision to live here.

How will this grant propel your work forward? My studio is almost like a lab. Je touche tout, they say in French. I touch it all. I like to play and create and push the envelope in many ways. I haven’t found my medium yet. I always try to bring something new to the table. It’s what keeps me alive.

Last year, I was involved with 3D printing on plexiglass. I illustrated a book called “The Kingdom of this World,”—it’s a wonderful novel about Haiti written in the 1940’s by a Cuban author, Alejo Carpentier, focused on magical realism. I’ve read the book several times since I was 16 or 17. Now that I finished that project, I’d like to do a whole installation of cut or etched glass. But the materials are costly, the technology is costly. I plan to use the money to invest in that field and perfecting that work.

What do you plan to do with your commission at The Bass? I’d like to create a whole room. But instead of being a blue room, let’s call it a crystalline room, filled with etched panels that are backlit—an elaborate piece. It will be focused on Miami and Miami Beach, and what is on everybody’s minds now, though nobody acts like it: the fact that the seas are rising. So it will be something new, about how Miami will handle being the new Venice.