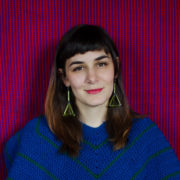 Mayer will create a mobile artist residency that also doubles as a survivalist shelter, focusing on sustainability and off-the-grid living inspired by prepper culture. The solar-powered residency will have a rooftop garden, be outfitted with a steel shutter system for times of extreme weather, and will attach to a towing vehicle in order to seek safer ground in times of natural or man-made catastrophes.

Jillian Mayer is an artist and filmmaker that explores how technology affects our identities, lives and experiences. Through videos, online experiences, photography, telephone numbers, performance, sculpture, painting and installation, her projects investigate the tension between physical and digital iterations of identity and existence.

Her works have been included in exhibitions at galleries and museums such as The Museum of Modern Art (New York), The Museum of Contemporary Art North Miami, The Bass Museum of Art (Miami), the Montreal Biennial (2014), the Solomon R. Guggenheim Museum, and film festivals such as Sundance, SXSW, and the New York Film Festival. She has been featured in a variety of publications including Art Papers, ArtNews and Art Forum.

Mayer is a recent recipient of the prestigious Creative Capital Fellowship for 2015, the South Florida Cultural Consortium Visual/Media Artists Fellowship 2011 and 2014, Cintas Foundation Fellowship 2012, and was named one of the “25 New Faces of Independent Film” by Filmmaker Magazine. She is also a fellow of the Sundance New Frontiers Lab Program for 2014, the Elsewhere Residency as a NEA Southern Constellation Fellow and the Zentrum Paul Klee Fellowship in Bern, Switzerland for 2013. She is currently included in Prospect.4 New Orleans, and LA/LA: A CELEBRATION BEYOND BORDERS, Pacific Standard Time (Los Angeles).