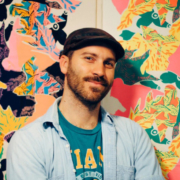 Nick Mahshie hails from the depths of Southwest Miami. Shifting freely between Art & Design practices, his work makes clear reference to the visual language of saturated Miami culture while challenging the seductive palette of both our landscape and our sartorial inclinations. His background in Painting, Fashion, and Print Design coalesce in the immersive installations, wearable sculpture and designed objects he creates. Previously, he has lived in New Orleans and Buenos Aires, Argentina, where he worked as a visual and performance artist as his alter ego, Tranqui Yanqui. He holds a Master’s of Design in Fashion, Body & Garment from The School of the Art Institute of Chicago, guided under the auspice of visual artist Nick Cave, and was the recipient of the distinguished 2017 RumChata Fellowship. He received a BFA in Painting from Rhode Island School of Design in 2007.

Mahshie’s artwork has been recognized by national Argentine newspapers such as La Nación, Clarín, and The Buenos Aires Herald, as well as National and Local publications The New York Times, Time Out Magazine and the Miami New Times. His work has been exhibited internationally in Argentina at ArteBA, Fundacion Telefonica, and Fundacion OSDE (Buenos Aires), as well as Le Petit Bain (Paris), StarkArt (Zurich), Children’s Museum of the Arts (NYC), and the Art & Culture Center of Hollywood (FL).